The misuse of loud speakers and sound system is illegal and prohibited by law in Pakistan. No one is allowed to use loudspeaker at free will whether in religious places, functions halls, marriage halls, social gatherings or even at home. Frequent and illegal use of loudspeakers at religious places not only cause nuisance for neighborhood but also spread the religious hatred and secretion tensions. 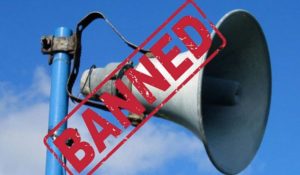 Before 2015, The West Pakistan Regulation and Control of Loud Speakers and Sound Amplifiers Ordinance 1965 deals with the misuse of loudspeaker in all the provinces of Pakistan. In 2015, Government of Pakistan launched the National Action Plan to combat the rising tide of terrorism. Under National Action Plan many laws were passed which also included the Punjab Sound System (Regulation) Ordinance 2015.

This new law provides strict punishments and simplified procedures of court. Previously anyone who misuses the loudspeaker would have to pay small amount of fine. Under the new law now the violator has to pay heavy fine and also imprisonment.

Overall the introduction of Punjab Sound System ordinance 2015 is very good step of government. It considerably reduced the illegal use of loudspeakers after its implementation. After implementation of this law, many cases are registered against the violator which creates deterrence and reduced the violations. Government needs to implement the law with true spirit and continue with the good results. In this regard role of Police and Prosecution is very important along with Judiciary.