The city of Lahore and its environs reflect a continuity that is rich in all kinds of heritage; be it architectural, social or even political. Ever the main city of most rulers of the times, it has places whose mere recall warms the hearts of the locals as well as the temporary guests that visit, initially known as “The Heart of the Sub-Continent”, and now of Pakistan.

But while the city takes pride in its architectural splendor through the mosques, minarets, mausoleums, ancient gardens and the Fort, it is no less proud of a sporting arena that even today, is a manifestation of all the splendor, the glory and traditional grandeur of its rulers of the past; the English, who created it and frequented to partake the enjoyment of a sport they introduced in the sub-continent; cricket. As one goes down memory lane, one realizes that the history of this ‘playing field’ reflects the introduction of the game of cricket to this part of the subcontinent and also witnessed its glorious periods; becoming a Test center and then, to its mortification, seeing itself shorn of that honor. Cricket is still played here, and even though Rudyard Kipling wrote that ‘East is East and West is West and the twain shall never meet’, the mere continuity of cricket being played here, endorses otherwise. 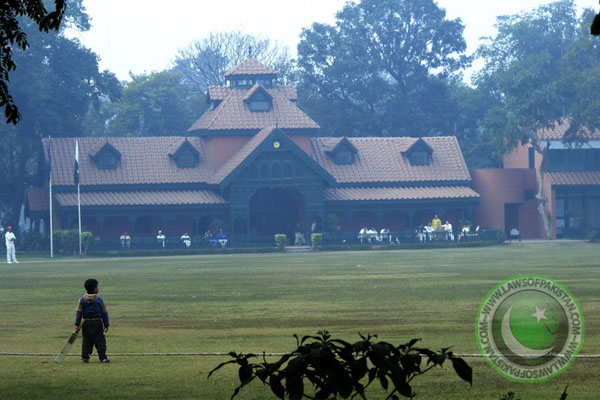 In due course of time, it became a fad with Oxon and Cantab civil servants to evince interest in cricket and discuss its finer points at social functions. By the by, natives of means and stature joined the English elite, to don white flannels and luxuriate in the surroundings found only at the Gymkhana ground. Even after independence, the pavilion still reflects that splendor of yore, reminding one and all of some elegant English country club pavilion, in the splendorous setting of Lawrence Garden (now Bagh-e-Jinnah), with Montogomery and Lawrence Halls overlooking the artistically laid-out garden and lush-green plots in the North.

The game of cricket in those days was patronized by rulers of Indian States. The Maharaja of Jammu and Kashmir like his counterpart, of Patiala, had regular fixtures against Lahore Gymkhana, Punjab XI and other teams.

The group photographers of years gone by, hung here in the pavilion bear testimony to the fact that cricket began to be played here in 1880. History has its evidence that the British rulers of those days, busy consolidating their Empire as they were, worked six days a week, taking the day off only when there was a cricket match – for the majority of cricketers were their own masters. This had to be. For long before the English bid ‘adieu’ to the Sub-continent, they needed a pastime that made them feel at home. And the game of cricket, being very ‘English’, was one sporting discipline that allowed them that luxury. Most government officers at Lahore along with some native civil servants, shared the fruits of the glorious days of regal pomp and show of the rulers of they day, lending beauty and grandeur to the games played at the Gymkhana.