The Sunnah (the Hadis, the precept, action and sayings of the Holy Prophet) is the second source of Islamic law. The Sunnah may be of three types, namely:
1- Sunnat-ul-Qual means all words, counsels or precepts of the Prophet.
2- Sunnat-ul-fieel means his actions, works and daily practices.
3- Sunnat-ul-taqrir means his silence implying a tacit approbation on this par of any individual act committed by his disciples.
All the Hadis collectiv3erly can further be classifies into three categories from the point of view of their inter se priority. The order of their priority is as follows:
1- Ahadis-i-Mutwater means those traditions which have received universal publicity and acceptance in each one the three periods namely the period of companions who were more righteous and had often shared the counsel of the Holy Prophet, the period of the Successors of the Companions known as Tabeen and the period of their successors known a tab-e-tabeen.
2- Ahadis-i-Mashhura means those traditions which through known publicly by the great majority of people, do not possess the character of universal fame. They carry conviction of genuineness but are reported by a limited number of Companions and thereafter in the tow successive periods aforesaid.
3- Ahadis-i-Wahid means those traditions which depend on the isolated individuals.
In the beginning, there was controversy as to the authority of Sunnah for; some believed that if later in point of time, it repealed the text of Quran. The accepted position, however, is that it is the most authentic source of Islamic Law next to Quran. This is based on the doctrine that the Holy Prophet, as a recipient of the message of God, was guided by him in his narrative and action. These both are, thus, the words of God, one expressed in direct form and the other as the interpretations and application of the word of God by His Prophet. There are, thus, be no contradiction between the two of them and this is the test to judge the authenticity of a Hadith. 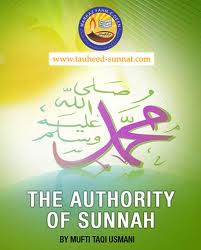 The position of Hadith as a second source of law is due to the repetition in the Holy Quran of the divine order “obey Allah and obey the prophet” in view of this Hadiths has a building character like the Quran.