Alongside Iran, Pakistan is one of the world’s largest producers and exporters of Persian rugs, or, more inclusively, “Oriental” carpets. The tradition of weaving textiles is important to many cultures, ancient and modern, and today unique Pakistani rugs are sought after from every corner of the globe.

The first Pakistani rugs were woven using spindles, as evidenced by excavations of ancient sites such as Moenjodaro and Harappa, which thrived a part of the Indus Valley Civilization (3300-41300 BCE), one of the world’s oldest urban societies, similar to Ancient Egypt and Mesopotamia with regards to culture, technology and language.

Carpets have a special place in Islamic religion and culture, because they adorn the floor of houses, mosques and even walls as tapestries for artistic and insulation purposes. Rug production quickened after Muslim conquerors, the Ghauris and the Ghaznavids, introduced the need for “Islamic carpets” in the 11th century. Between the 11th and 16th centuries, Pakistani carpet weaving was refined using the new techniques. Their popularity increased when European crusaders sacked Constantinople and discovered lovely “Islam carpets” in their loot. 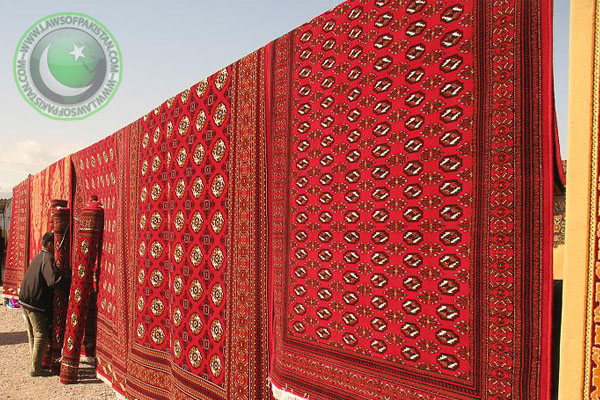 By the early 16th century, the role of these carpets expended. Instead of being used primarily as carpets, wealthy owners made them the center of their rooms hung them as tapestries alongside the Flemish ones of the late 15th century and even made them focal points of Renaissance paintings.

Under the Mughal Empire, the rugs reached their peak. The ‘Golden Age’ or ‘Classic’ period of Pakistani carpet weaving took place during the first half of the 16th century.

It was during this time that rugs produced in Iran, Pakistan and Turkey became widely recognized as “Islamic carpets”, thereby ensuring their fame for centuries to come. They were so popular that they became symbols of cultured taste, class, sophistication and worldliness, especially because Pakistani – and other “Oriental” – carpets were so scarce. Any social climbing merchant in Venice felt obliged to own one area rug.Pakistani rugs continue in their appeal today. With the creation of Pakistan in 1947, many Muslim carpet weavers migrated there and settled in two primary places that now serve as the home to carpet weaving today, Karachi and Lahore.

Therefore, the tradition of sumptuous textiles flourished with geometric designs, paisleys, center medallions and gulls continues in Pakistan, one of the greatest producers and exporters of area rugs today. Ninety-five percent of the carpets are produced for export and Turkoman, Persian and Caucasian designs are crafted since they meet the popular taste abroad.

Balochistan and NWFP excel in tribal Turkoman patterns and color combinations, while Lahore and Karachi are famous for single-wafted designs in Turkoman and Caucasian style, and double-wafted Mughal types.

Almost 95% of the carpets produced in Pakistan are imported to USA, European markets and Middle-East, where they are in great demand.