You are here: Home / Cars / Suzuki / Difference between Suzuki Cultus VXR and VXL

Recently Suzuki Pakistan launched a fully-loaded hatchback car with name of New Suzuki Cultus in Pakistani auto market. The sleek and dynamic car comes with impressive 1.0L K-series, fuel efficient engine and dual SRS airbags. Although there are all modern features in this stylish car yet the one problem is its high price. According to many market analyst and experts the price is high as compared with other hatchbacks in the market. In this price rang better imported Japanese cars are available in the market. Company introduced two variants of New Suzuki Cultus 2017;

There are some difference between New Suzuki Cultus 2017 VXR and VXL which are given as under.

Cultus VXL has power windows while VXR comes with old style handle through which you have to pull the mirror up or down with your own hand. 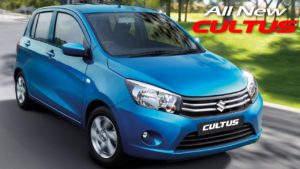 Presence of Dual Air-Bags is the most important difference between both variants of Suzuki Cultus. Suzuki Cultus VXL comes with this latest safety feature but VXR don’t have this feature. Dual Air-Bags means it has air bags not only for driver but also for passenger on front seat.

These above-mentioned are the differences between Suzuki Cultus VXR and VXL. Overall New Suzuki Cultus 2017 is perfect hatchback car but with high price tag we will have to wait for the response of Pakistani customers.